Home
About Me
SAY HI

Launched in 2012, Blinkist is a micro-learning and nonfiction book summary app. As well as holding a library of informative and educational podcasts, the app is predominantly known for it’s ‘Blinks’; short 10–30 minute audio summaries outlining the key points of the non-fiction books, that aim to help users learn more in less time.

There is potential to create a feature in which users could continue their learning after completing Blinks, by engaging with others within the Blinkist community.

An opportunity for users to further their commitment to building a product which changes people’s lives for the better.

Who and how long?

By conducting a screener survey, we were able to find potential interviewees, whilst also understanding some basic initial reading habits of Blinkist and non Blinkist users. 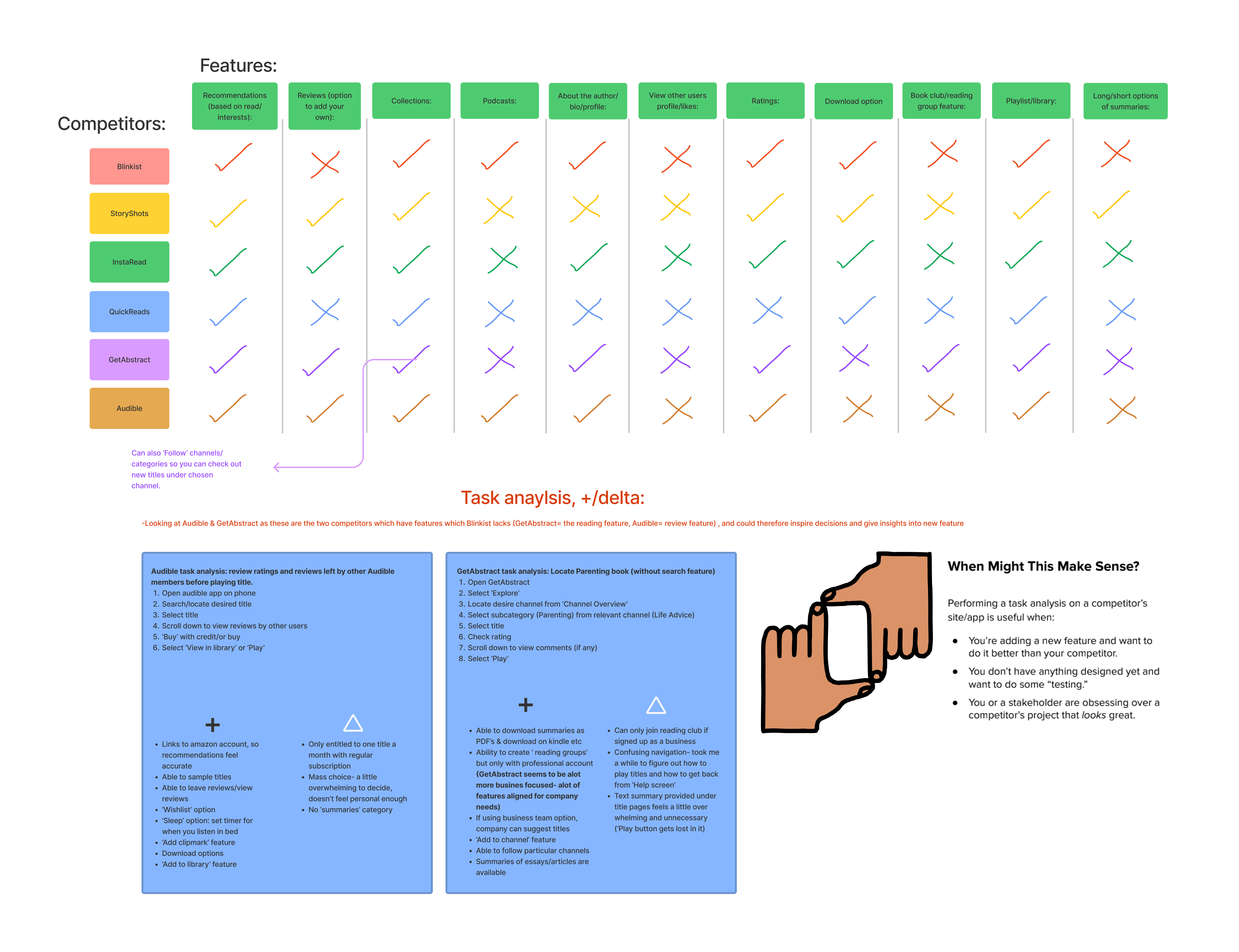 I conducted a competitor analysis. This consisted of a feature inventory of similar apps on the market, and a task analysis of GetAbstract and Audible, who are Blinkist’s two biggest competitors. 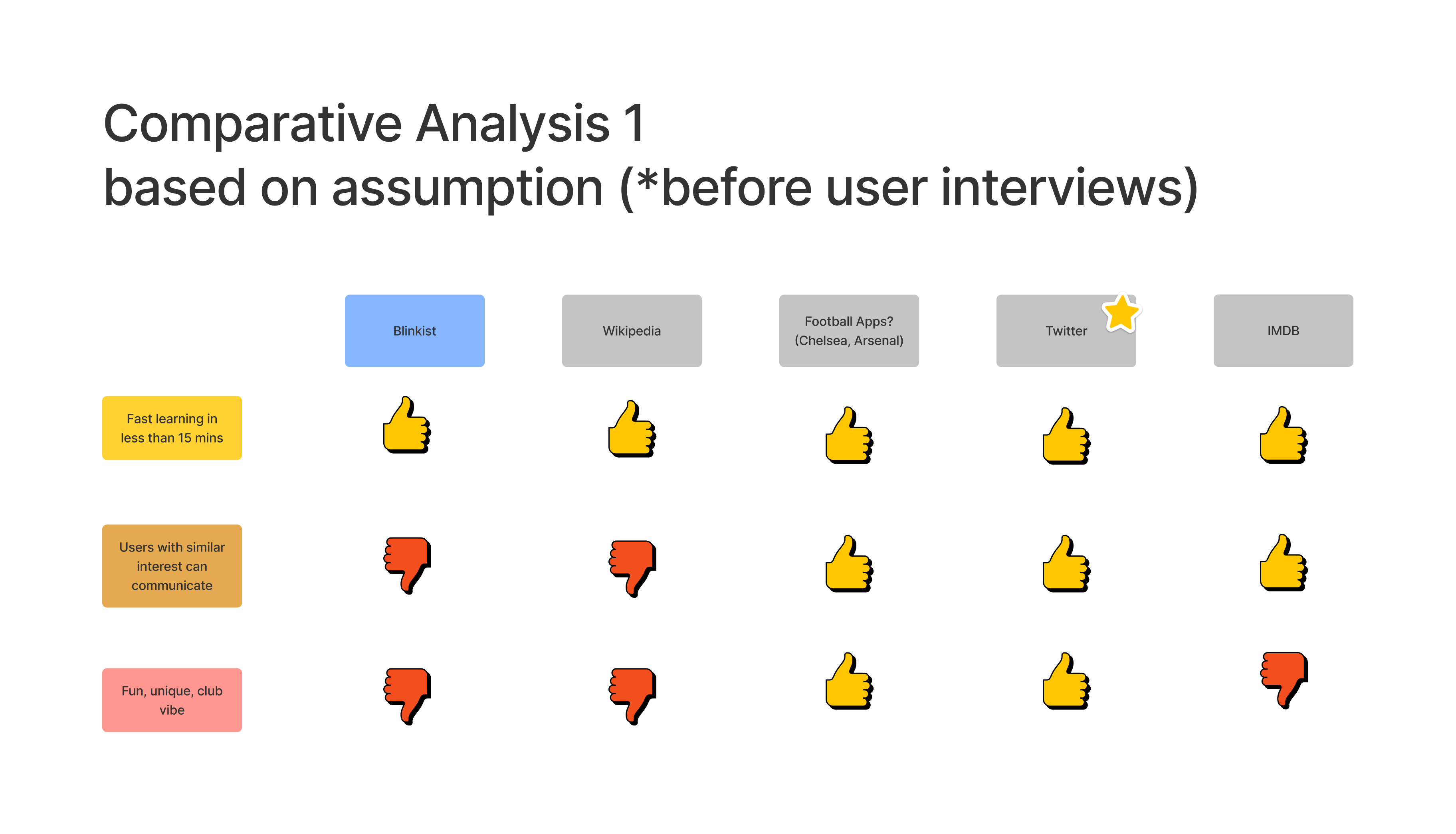 Zsofi conducted a comparator analysis with Wikipedia, Football Club Apps, Twitter an IMDB, in order to look at how they facilitate a sense of learning and community. 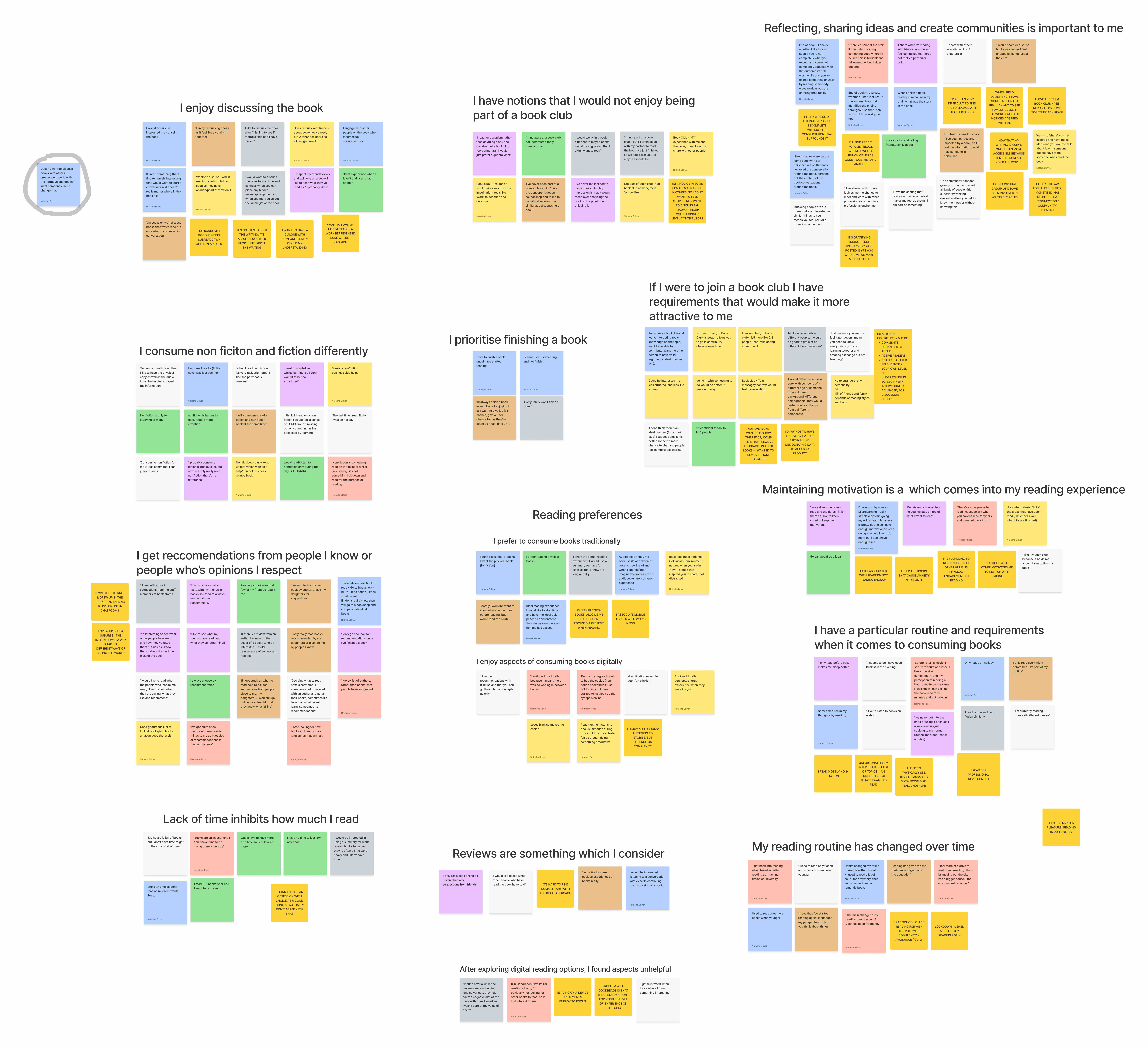 We interviewed 10 book loving people in total, 8 of which were not Blinkist users and 2 of which were. I conducted 3 of the interviews and took the notes for another 3 of them.

These key findings are as follows:

And finally a summary of all the interviews, that we found important to remember:

We created 2 persona's to summarise our interview findings and highlight key desires and pain points of our users in a focused personalised way.

As we had more data on non Blinkist users, ie Alex, we focused on him as our primary Persona. 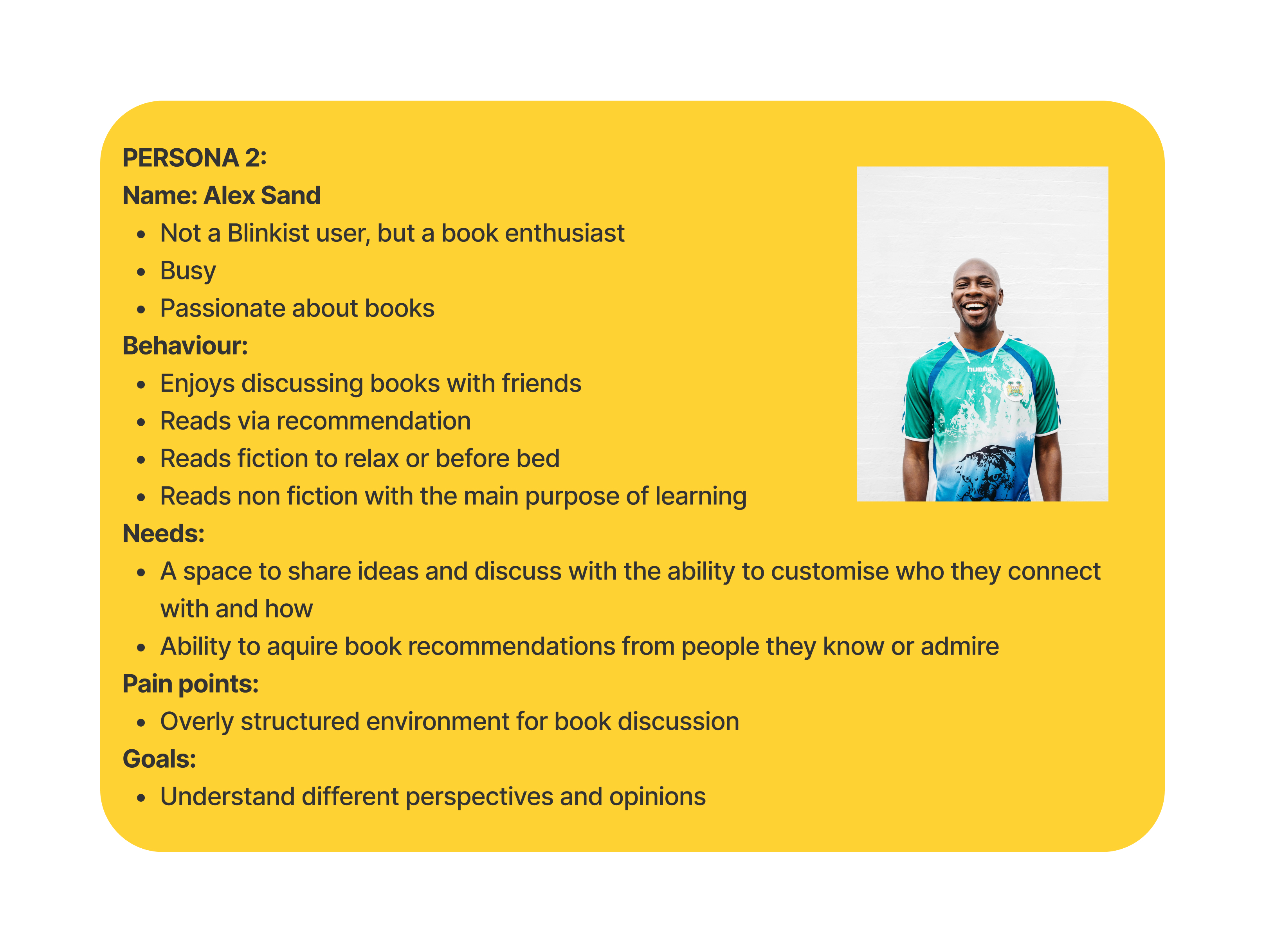 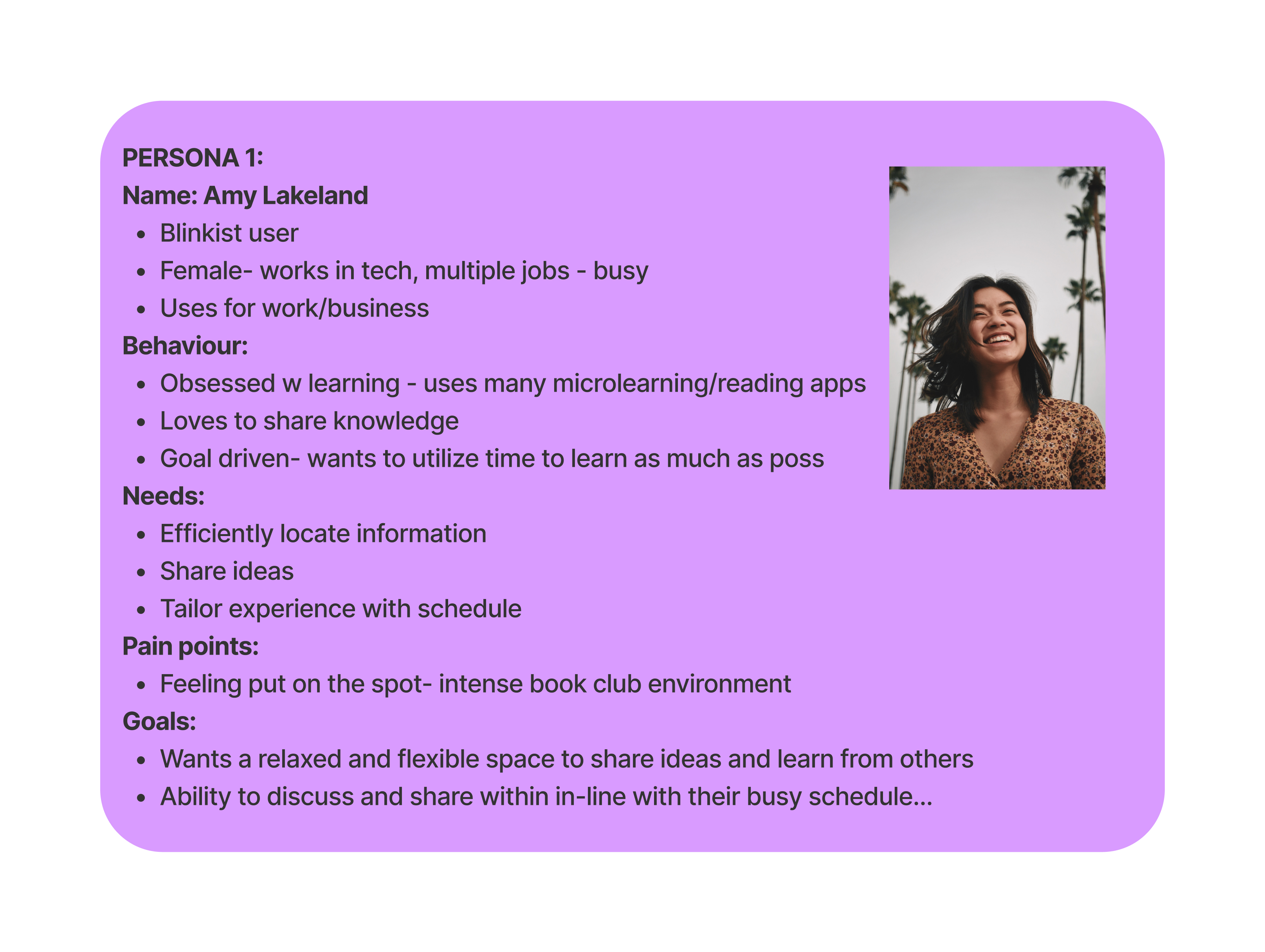 We summarised Alex’s needs and goals into our Problem Statement:

'Alex needs a relaxed environment in which to share ideas, discuss books and gain recommendations from friends and people he admires in order to create meaningful communities to inspire his self development.'

We also created a How Might We statement in order to better direct our process and reinforce our motivations:

'How might we deepen the emotional aspect of reading, by creating a space within the Blinkist app, where users can share and discuss books in relevant communities?'

With our problem and How Might We statement at the forefront of all our minds, we were feeling ready to get right into sketching some solutions. To kick us off, we completed a super fun design studio session consisting of a bad idea party, good idea party & crazy 8s.

The main idea we decided to carry forward from this session was a ‘Community’ page where users can start discussions relating to Blinks, privately or to the whole platform

After deciding on this idea as it most aligned with Alex's needs, Zsofi took the lead in sketching some wireframes which Natasha tested with 5 people.

From this quick initial testing, we decided to change the name 'Communities' as it was misleading for users. 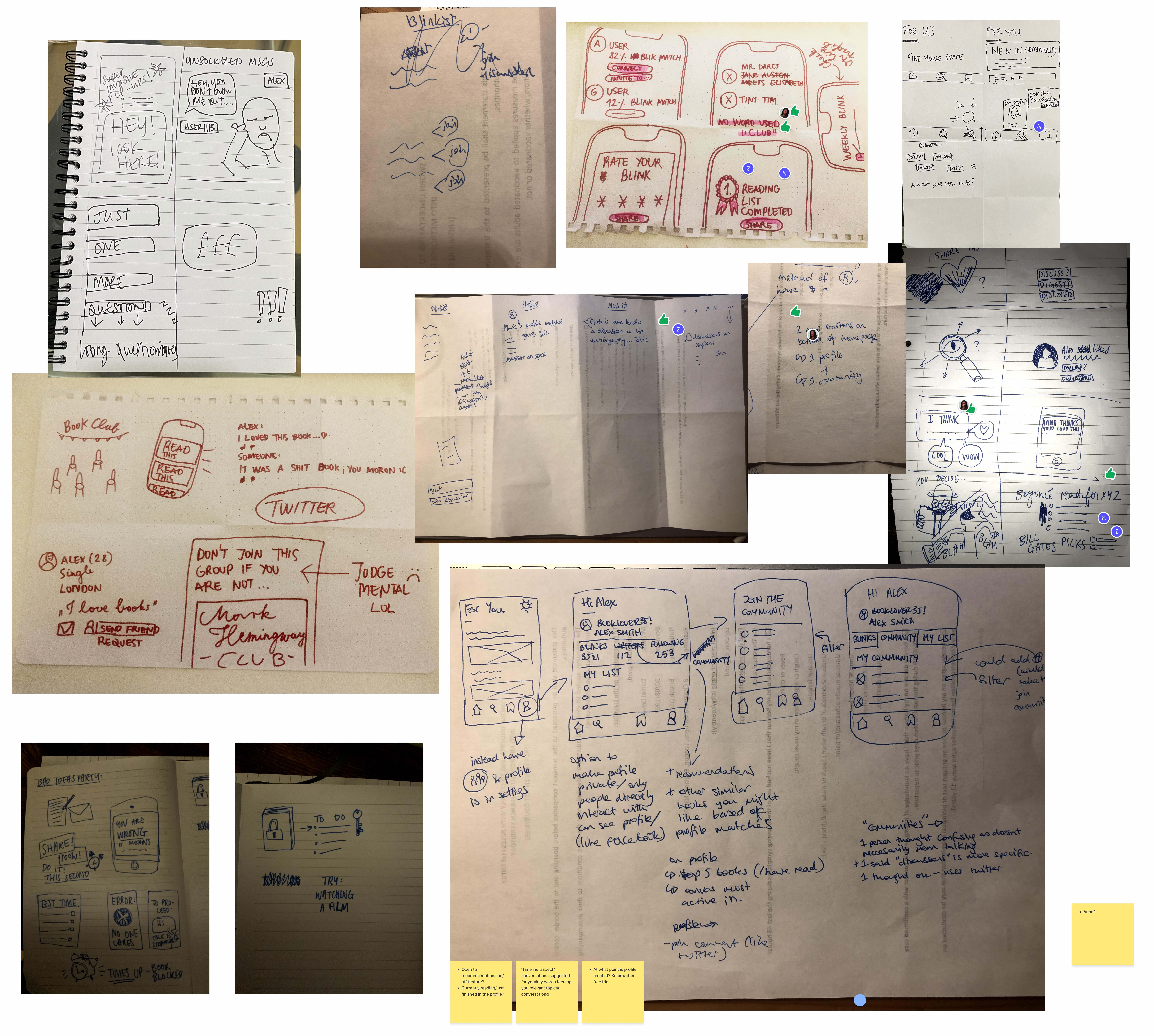 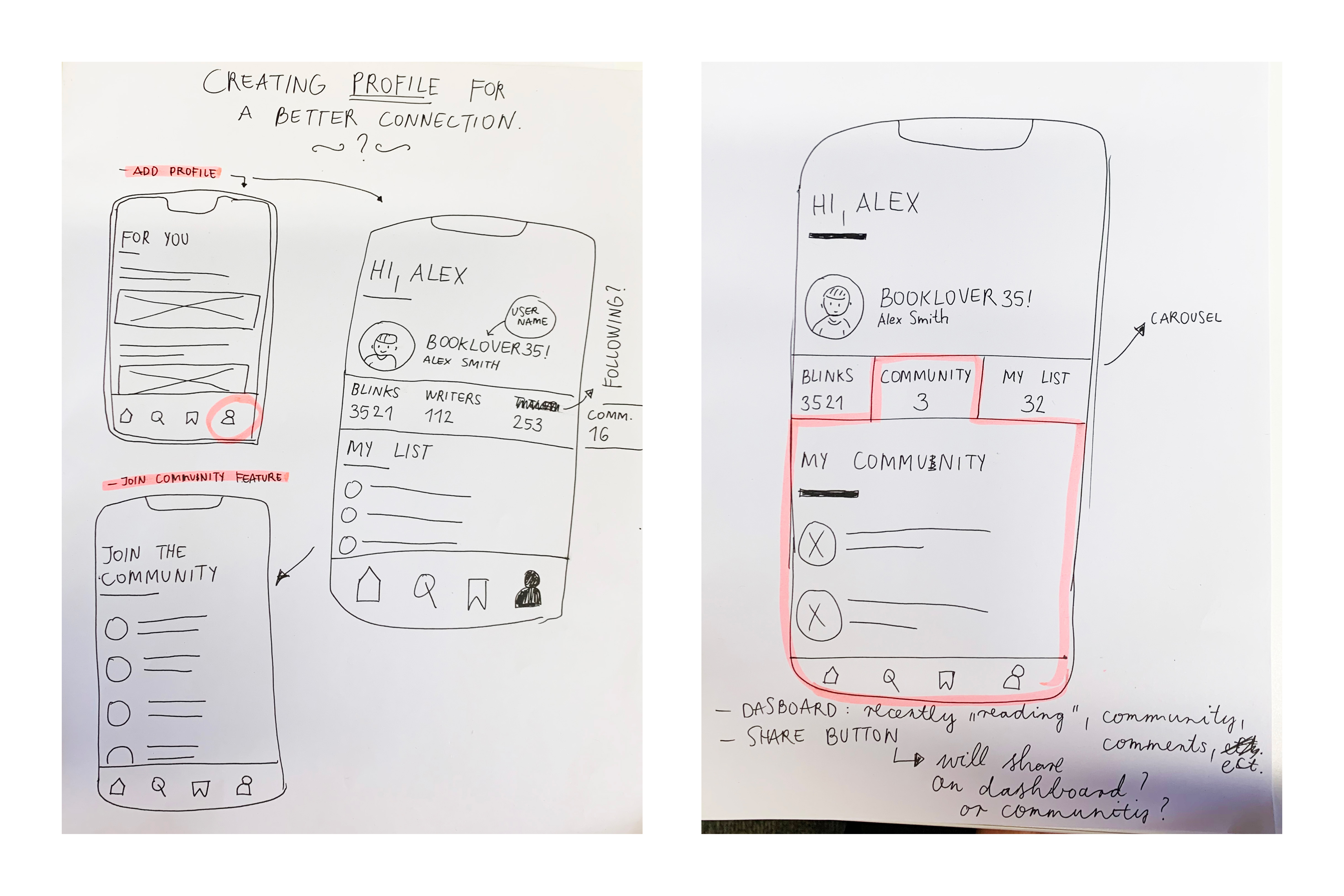 This gave us a lot of insights, of which we implemented into the next prototype.

As well as this, we gained some increasingly insightful feedback on the name:

We listened to the insights users gave us from the usability testing and implemented it into the prototype shown below.

This project was really interesting to work on, and it really improved my interviewing skills and experience conducting usability tests. I think we made the right choice by testing often, as it allowed for multiple iterations.

However, I feel this did slow us down, and because of this pace I feel we did not develop the feature to its full potential. In order to avoid this in the future I will be utilising a user flow more specifically, to make sure we have a clear goal and scope of what needs to be designed.

Furthermore, another key learning from this project for me was the practise of not letting our personal biases affect our design decisions. We had a really interesting debate on the ethics of letting someone join the Blinkate anonymously. We solved this roadblock by gaining further data from users through a survey on this question specifically, which reminded us all to put aside our personal feelings toward the subject moving forward.